The Power of Head Start Story: By Amparo 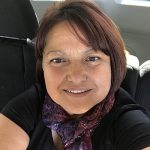 I have been with Migrant Seasonal Head Start through Community Action Partnership San Luis Obispo for 19 years. I immigrated here from Mexico in 1989 with my four daughters and two sons. I started working at home babysitting six kids. I worked very hard for almost 10 years and in 1997, I decided to attend adult school to learn English. After two years, I went to college and got my associates degree in Early Childhood Education.

During my first classes at college, I was trying to figure out my career path and decided I wanted to serve families in some way. In 2001, I took a job as a food transporter at the Community Action Partnership of San Luis Obispo, in South

Monterey County. I remained in that position for one year, but I desired to work directly with children. So, in 2002, I became a preschool teacher’s assistant and in 2003 I became a preschool teacher. In 2006, I transferred to Kern County as a Family Service Advocate. During my two years as a family advocate, I gained a lot of experience in that field, partially due to being mentored by a wonderful area manager named Lupe, who guided me and supported me during my time working for the Misteco Community. I was so impressed with this community! Parents were very good educators for their children in all areas, such as academic, social, and religious.

I returned to South Monterey County in 2009 due to the high levels of air and water contamination in Kern County. In 2015, I obtained my Family Development Credential from Connecticut University. I am so grateful for this program and Head Start for providing me with many opportunities to grow as an individual and as a professional.

A Few of Our Head Start
Partners

In 1967, my mother enrolled me in Head Start at 3 years old. I loved the environment, the teachers, socialization…

My mother came to the United States with many hopes and dreams. She worked multiple entry-level jobs in order to…

The Power of Head Start Story: By Myra Acosta